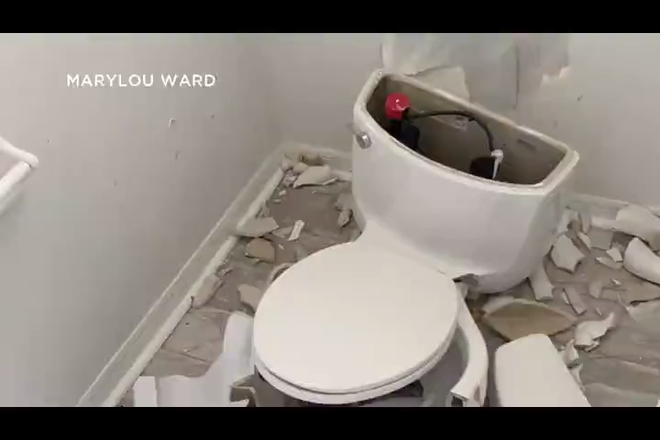 “Methane gas is gas caused by the number two,” Jordan Hagadorn, owner of the business repairing the couple’s toilet, A-1 Affordable Plumbing Inc., told USA TODAY. “The natural gas is from crap, literally.”

Over time, as people use their bathroom, methane builds up as the septic tank is filled. The lightning was the perfect source of ignition.

The couple was still in bed that morning when they heard the toilet and pipes blow up, Ward told WTHR-TV.

A-1 Affordable Plumbing wrote in a Facebook post that the toilet exploded in the master bathroom, “sending porcelain airborne like a missile.” The porcelain of the toilet actually penetrated the wall.

The toilet was blown to pieces as the explosion traveled through the pipes into the house. Even parts of the windows blew out, Hagadorn said.

Ward said that it was very weird to see. She never thought something like that could happen. “Sure glad I wasn’t in there,” she told USA TODAY.

It took him three hours to assess the damage Monday: The sanitary pipe is completely gone, the lid of the septic tank blew off and the toilet was demolished, too, he said.

The septic tank’s lid was only an inch underground. That short distance between the surface and the tank probably contributed to why it was possible to explode.

“This might even bring out new laws and regulations for septic tanks,” Hagadorn said.

Methed-up gators and ducks and geese:Tennessee police warn against flushing drugs down the toilet

Hagadorn is a second-generation plumber. His father, who was a plumber for 40 years, never saw anything like this either. He said it’s probably “a first in plumbing history.”

He recommends that people don’t use the toilet during a thunderstorm. Ward certainly won’t be doing that.

“I’m not taking any showers and not going to the bathroom,” she said to WTHR-TV. “Not when it’s thunderstorming and down here, that’s a lot.”