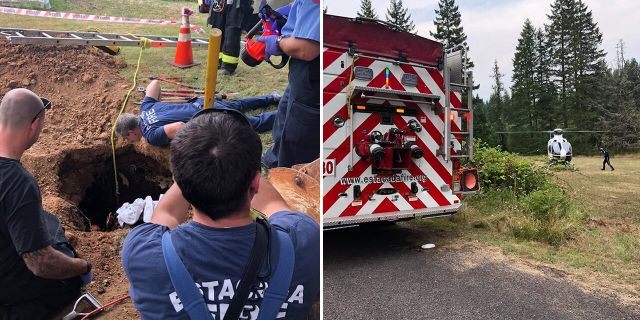 A woman in Oregon was rescued last week after she fell into a septic tank and got stuck in raw sewage for days, officials said.

Firefighters pulled the unidentified woman from the tank on Tuesday and rescue crews airlifted her to a hospital via helicopter, the Estacada fire department wrote on Facebook.

“She was alert enough that she was able to grab onto the ‘D-handle’ of one of our tools and set herself up a little bit,” Richard Anderson, a division chief for Estacada Rural Fire District No. 69, told Fox 12. “And then, they were able to get a strap around her and they were able to lift her out of there with that.”

The unidentified woman had been working on the tank outside her rural home, where she lived alone, when she fell in, investigators said. Her closest neighbor was over a thousand feet away, fire officials said, rendering her cries for help hopeless.

Anderson said the woman’s daughter went to check on her after not hearing from her mother since Friday, KATU reported. The concerned daughter found her mother had fallen through a hole in the ground and into the tank.

A crew from Life Flight Network airlifted the woman to a hospital via helicopter. (Estacada Rural Fire District No. 69)

Anderson said a hole had been dug in the ground exposing the tank, which had a 2-foot by 2-foot hole through its rusted metal top, the station reported.

Firefighters used poles and a strap to hoist the woman out of the sewage and through the hole, KATU reported.

The woman’s condition was unknown, but she didn’t appear to have any visible injuries at the time crews rescued her, according to firefighters.

Estacada is about 30 miles southeast of Portland.