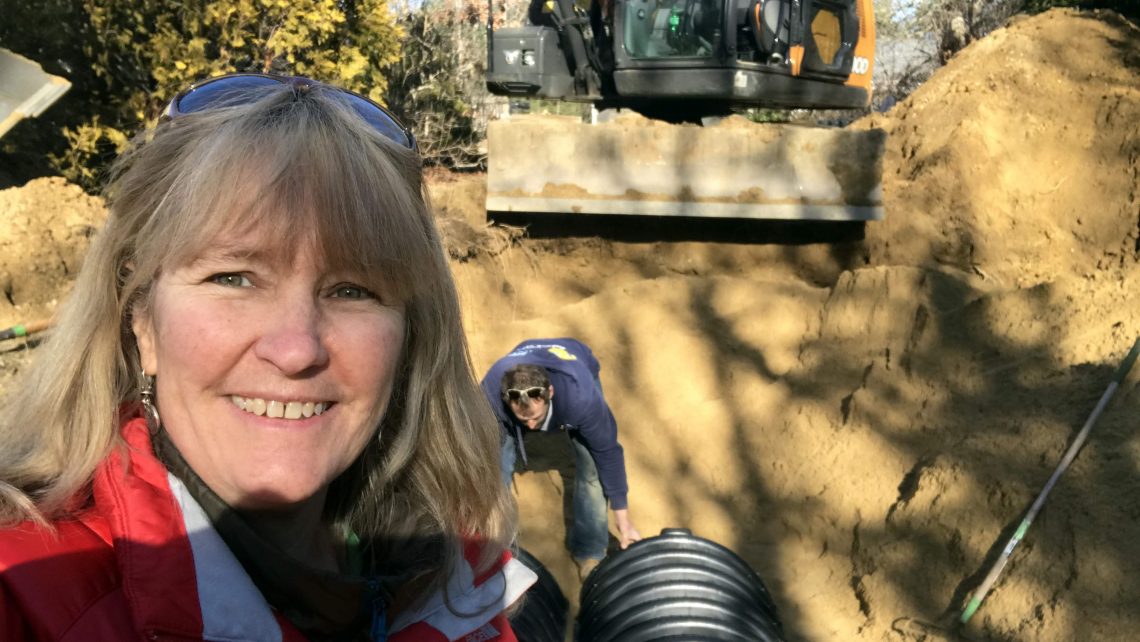 This is the second of a two-part series.

Part 1 covered the problem: excess nitrogen and phosphorus from the Cape’s existing septic systems are creating toxic environments in our bodies of water. Period.

Let’s start by presenting how existing septic systems work and why they’re failing us. Cronin, who has designed and installed hundreds of septic systems, explained that in a typical septic tank, wastewater flows from the household and into a tank, which holds the wastewater long enough so that solids (aka sludge) settle to the bottom (to be later pumped out), and oils and grease (aka scum) float to the surface. The separated wastewater is then piped out of the tank and discharged into a drain field or leach field that releases the wastewater into the soil for natural absorption.

“The soil will treat the pathogens in the wastewater and make them inactive,” said Cronin, “but it doesn’t take out the nitrogen.”

Studies have indicated that in good healthy soil, four feet is what is needed to remove harmful bacteria and pathogens. But some areas of the Cape have such coarse, sandy soil that the wastewater percolates right through and doesn’t get the necessary treatment that soil can provide, Cronin said.

But there are also alternative septic systems in place. Instead of a standard Title 5 septic system, an added treatment tank, or a treatment module inside a custom-made septic tank, works to “de-nitrify” wastewater to acceptable levels. Unfortunately, they’re expensive.

“It could add a considerable cost over and above the typical Title 5 system, not to mention an operations and maintenance plan, and it uses more electricity,” Cronin said.

Town sewering has been touted as a necessary part of the solution to the septic problem.

Sewering is essential, says Gottlieb. The region-wide wastewater management plan, more commonly known as the 208 plan developed by the Cape Cod Commission, envisioned that each town on the Cape would have its own plan and some shared infrastructure with neighboring towns rather than one central treatment plan serving the entire Cape.

The collected wastewater would end up in a wastewater treatment center, much like the one in Hyannis. Wastewater gets treated to remove contaminants, bacteria and nutrients and then is discharged back to the ground in a location determined to be able to handle the treated effluent. Typically, these discharge areas are outside sensitive watershed and recharge areas for drinking water supplies.

“The notion that there’s an alternative that doesn’t include some amount of sewering is wrong,” he said. “If you sewer, the nitrogen and phosphorous never go into the ground in the watershed of the sensitive resources we are trying to protect – it’s the only solution that can solve the problem in its entirety.”

While alternative septic systems can reduce nitrogen, they don’t necessarily do the same for the phosphorous, which limits their effectiveness for water quality problems in lakes and ponds.

But even though a sewer system would eliminate the nitrogen and phosphorus problem, not everyone agrees it is the best solution. With a traditional septic system, homeowners and businesses must comply with laws regulating the number of bedrooms or employees, or restaurant seats, etc. in a home or building.

“With sewering, those measures are no longer in place, and we’d have no population control,” Cronin said. “Not to mention, sewering is a huge expense, and we would need large land areas for the treatment facilities.” Utilizing off-Cape treatment facilities would remove large volumes of water that would no longer be available for recharge, which would create other environmental issues, Cronin said.

A reasonable and less costly solution is both: a combination of sewering and alternative septic systems, an approach that is the basis of Barnstable’s Comprehensive Wastewater Management Plan.

“Alternative septic systems are not new, in fact there are several thousand in operation on the Cape and Islands,” said BCWC’s Crocker. But he said these systems have flaws: They’re costly to maintain, and their performance hasn’t proven to be much better than existing Title 5 systems.

One such system, named NitROE, is configured similarly to a traditional septic system, with a tank and a leach field. But in between, the wastewater travels into an aeration chamber and then through a chamber of wood chips which process the wastewater to a level close to that of many municipal treatment systems.

Crocker said 10 of these systems are currently being tested on Martha’s Vineyard with very positive early results. To him, sewering makes sense in higher density areas, but in communities farthest away from wastewater treatment plants, individual systems may make more sense.

“Sewering infrastructure costs are very high, and there are limited wastewater disposal choices, such as the controversial outfall pipes into Nantucket Sound.

“We have to look at the capacity of the existing systems and look at the cost,” Crocker said. “In denser neighborhoods, sewering may be more practical, but elsewhere, individual systems may offer a better option at lower cost.”