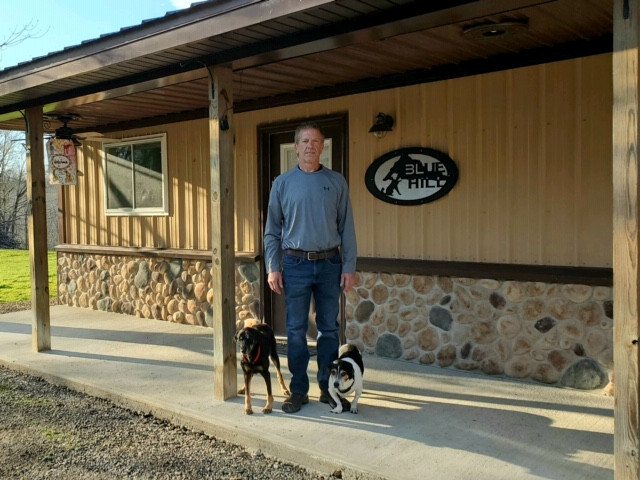 Robb Lewis had a dream to own a business one day.

So, it was with great joy when he closed on the Chaffee property late last year to launch his life-long dream business that caters to family pets.

He quit his job as a construction dispatcher and Blue Hill Pet Grooming and Resort became a reality.

“This is what I’ve always wanted to do,” Lewis said.

Lewis had just one small thing to resolve – at least he thought it was small.

The Erie County Health Department had to inspect the septic tank at his old property in Holland.

Not a big deal, right?

Well, the earliest the county said an inspector could come out was Oct. 28, 2019. That was past the closing date, so Lewis had to pay $300 to extend the date. Small inconvenience at the time.

But when a county inspector did come, he found a problem and failed the septic tank.

As a contingency to close on time, the buyer’s attorney required Lewis to put $12,000 in escrow to insure the tank would get fixed and pass a second inspection.

This is when things really fall apart.

Lewis fixed the tank within five days, using about $2,500 from the escrow to cover the cost of repairs.

But by that time, Erie County had already shut down septic tank inspections for the winter season. Didn’t matter that there was no snow on the ground. They refused to do the second inspection until the next season. That’s their policy, Lewis said he was told.

Come March, no one anticipated a health crisis would shut just about everything down and keep people inside their homes. But that is exactly what has happened with the coronavirus pandemic, which has killed 254 county residents.

As a result, the Erie County Health Department suspended all septic tank inspections until further notice.

“To me, it’s a rubber stamp and a signature,” Lewis said. “I can’t think of one good reason they can’t do this for people.”

The possibility of many months of delay was real for Lewis and others who still need a septic tank inspection to close.

There are at least 571 open or pending property transfer applications with the county health department to inspect septic tanks and water wells.  Closings are often contingent on these certifications, and if for some reason a situation like this pops up, the seller must drop a large sum of money in escrow until everything is finished.

To make matters worse, Lewis had to temporarily shut down his dog grooming business because the state deemed it as non-essential.

Now, he has no way to earn a paycheck.

He’s had to borrow from family and friends and he hitched a part-time job with a relative who is in the somewhat rare position of still having a business that can be open during the pandemic.

“It’s embarrassing for me to admit that, but yes,” Lewis said.

Lewis cannot access the money in escrow because the tank still has not passed final inspection.

Lewis said that he could stretch that money out to sustain him for three additional months, but it’s locked up out of reach.

She told News 4 that the county’s septic tank inspection division is understaffed and that several of her closings had to be delayed last year because the county could not schedule the inspections fast enough.

“They need to be testing the systems,” Lesinski said about the Erie County Health Department.

“Last year was bad. They were short on inspectors. They don’t realize what happens to these people behind the scenes.”

Erie County Legislator Joe Lorigo tried to get the county to budge.

The county, initially, only agreed to waive the $150 inspection fee, even though Lewis had not even been able to schedule his old tank for inspection.

“Their read from the beginning was that this was non-essential work,” Lorigo said.

“You can’t send sanitarians out to the rural parts of the county to do this work?” Lorigo thought out loud.

“This is crazy. You can’t tell me this is about Covid-19. You have the inspectors. They need to go out there and do their jobs that they are supposed to be doing.”

Lorigo said he was told that some of the inspectors were pulled off the job to police non-essential businesses violating the state’s PAUSE order, which prohibits them from being open until at least the middle of May.

Kara Kane, a spokeswoman for the county health department, said they suspended all property transfer inspections “due to the COVID-19 situation in an effort to protect the public and our staff.”

“We had a concern about staff entering individual residences to perform these inspections,” she said.

In some cases, not all, the county inspector drops colored dye in a toilet while the homeowner runs the water to test the strength of the tank. If the tank fails, the inspector will see the colored dye in the yard.

The county did change its policy: On April 20, the health department agreed to resume some inspections “on a limited basis.”

“We are only performing external inspections of properties that are on public water and have a system of record on file,” Kane said.

This does not help Lewis.

His former property in Holland is on well water, and that, too, needs to be retested; the certificate is no longer valid.  Lewis will be on the hook for any problems that might be discovered with the well and septic, even though he has not lived on the property since October 2019.

“We are continuing to evaluate the situation and will add additional inspections as conditions allow,” Kane said.

“Homeowners who meet our current criteria for inspections will be contacted for scheduling by the Division of Environmental Health.”

Lewis could hire an outside engineer to complete the inspection process but that’s $600 he believes he should not have to spend. The county will only reimburse $150, he said.

Lewis doesn’t know what to do. He has hitched a job with his cousin to help make some money and he is leaving this mess with his Realtor to work on while he tries to stay afloat.

“They could be heroes,” Lewis said about the county inspectors.

“But they circled their wagons over why they can’t help. They throw around that $12,000 figure like it’s nothing.”