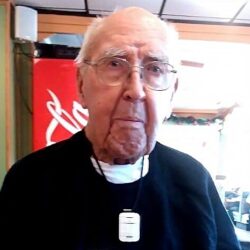 After many years of service to his community, Roy Nickerson will receive thanks from the town of Turner  with a drive-by parade Wednesday  in front of his house to celebrate his 100th birthday. Participants should line up in their cars at 5:30 p.m. Wednesday on Blake Road near the Turner Fire Station. At approximately 5:45 p.m., the drive-by parade will head down Blake Road, pass through Nickerson’s driveway and exit onto Route 4.

“We’re asking people to stay in their cars to stay safe,” said Tom Desjardin, who works in the Maine Senate Republican Office. Desjardins said he sent the memo on the behalf of state Sen. Jeff Timberlake of Turner.

Nickerson served five years as a Turner selectman and represented the town for eight years in the Legislature.

He served in the U.S. Army Air Corps and the Air Force from 1939-1961 and later owned Nickerson’s Septic Service and Nickerson’s Country Store, which he opened in 1961 and operated  through 1986.

Organizers are inviting all residents of Turner and the surrounding area to participate and “bring signs, smiles and song.”

Please check your email to confirm and complete your registration.

Use the form below to reset your password. When you’ve submitted your account email, we will send an email with a reset code.