Final details of the accord need to be worked out, and any penalties to be levied against Barile and his partner, Tommy Boniello, by the town of Carmel or Putnam County remain on the table.

“DEP has determined that connecting this property to the sewer system is in the best interest of protecting water quality in New York City’s reservoir system,” said spokesman Adam Bosch. 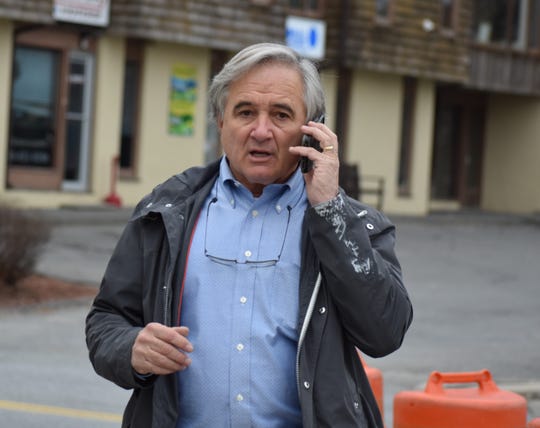 Carmel Town Board member Mike Barile, on March 10, 2020, talks on his phone during the pressure test of his unauthorized sewer line. (Photo: David McKay Wilson)

The decision comes 10 months after a Tax Watch investigation raised questions about the treatment of wastewater at the popular restaurant on the shores of Lake Mahopac, which has had several names since Barile opened the eatery in 1993. The restaurant was opened after Barile had installed the sewer line under Route 6N, but had failed to win NYC DEP approval to connect it to the town sewer, as required by town law.

Tax Watch also learned Friday that the town of Carmel, on whose ruling board Barile sits, referred the matter to Putnam County District Attorney Bob Tendy, said First Deputy District Attorney Larry Glasser. The town has alleged that Barile committed a misdemeanor crime by violating the town’s Sewer Use Law when he made the sewer connection without authority from New York City.

“We are currently reviewing it,” Glasser said.

Barile, who has commercial real estate holdings in Mahopac, was elected to the Town Board in 2017. When asked for comment, Barile texted: “Go away.”

Barile had claimed that he used an on-site septic system at Blu at the Lakehouse, which is situated on a 0.6-acre parcel on the lake shore, which serves as the drinking water supply for about 500 Mahopac households. The septic system’s leaching field was purportedly under the paved parking lot.

But when NYC DEP investigators arrived in September to test the septic field, Barile acknowledged that he had hooked up the sewer line to the Clark Place manhole in early September, which was where it was supposed to connect, according to his 1993 plans.

At the time, Barile was seeking DEP approval to make the connection.

A subsequent town investigation found that the line was actually connected to the sewer main five feet downstream from the manhole in a connection made in the early 1990s, according to the town’s violation notice. Members of the Lake Mahopac Park District Advisory Board told Tax Watch they suspected that Barile’s sewer line was connected for many years.

Carmel Town Board member Mike Barile takes a picture of his unauthorized connection, at the corner of Route 6N and Clark Place in Mahopac on March 10. (Photo: David McKay Wilson)

In September, the DEP said it would not review Barile’s application to connect the line until investigations from the town and Putnam County had reached a satisfactory conclusion. That created a stalemate because neither the town nor the county would complete their inquiries until the DEP finished its review.

“Our approval was only issued after DEP confirmed that any violations from the town, county and state would be effectively closed out by formalizing the property’s connection to the town sewer system and our wastewater plant,” Bosch said.

The town sewer law carries penalties of $1,000 a day. On Friday, it was 227 days since Barile’s engineer said Barile made the connection at Clark Place.

It has been almost 27 years since the line was installed in 1993. The penalties over that time period could reach $10 million.

Also outstanding are fines of up to $2,000 for violating his permit with the Putnam County Department of Health. 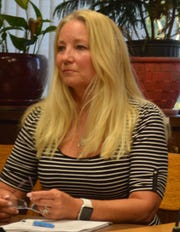 Deputy Supervisor Suzi McDonough has taken the lead at Town Hall in the case against Mike Barile and his illicit sewer connection. (Photo: David McKay Wilson)

Deputy Town Supervisor Suzi McDonough said Thursday that the all-Republican Town Board would not comment on possible penalties for their Republican colleague.

“The town is not in a position to comment on any additional enforcement action with respect to fines and penalties under the town code at this time,” she said.

“There has to be accountability for anybody who committed a crime, especially if that person holds public office,” she said. “To let this go without any consequence would send the wrong message to everyone.” 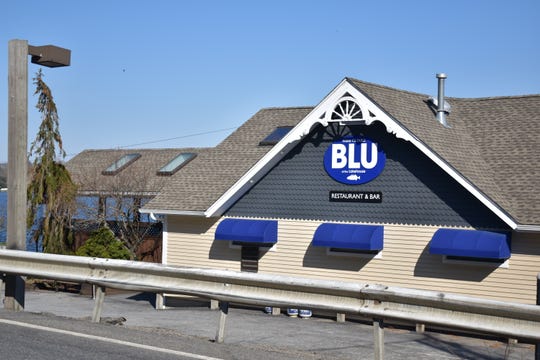 Mike Barile installed the sewer line from his restaurant at 825 South Lake Blvd in 1993, but did not obtain permission for connection from the NYC Department of Environmental Protection. (Photo: David McKay Wilson)

Barile has yet to pay for sewer service, even though he has been hooked up for at least seven months.

Barile has a private sewer line because his restaurant lies a quarter-mile outside the sewer district boundary. To become part of the district, he’ll have to pay back charges on capital costs of about $6,500 and will be billed annually for the costs associated with the town sewer main.

But he won’t enjoy free sewage treatment at the NYC DEP sewage treatment, as do those within the district. According to the draft agreement, he’ll pay an annual fee to the DEP for treatment, based on his usage. Barile will be allowed up to 800 gallons a day. Any excess will likely be charged a higher rate.