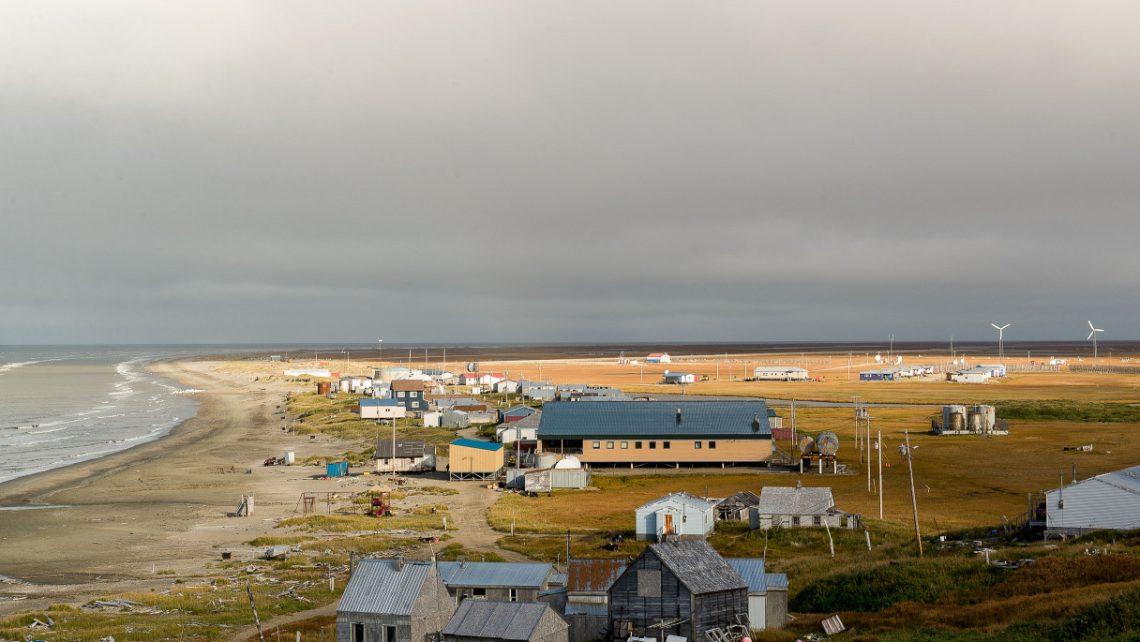 As aging water systems, climate change, and federal and state bureaucracy threaten the public health of Alaska Native villages across the Bering Strait region, local residents struggle to find the funds for critical water & sewer infrastructure. In part one of this two-part series discussing unserviced communities in Western Alaska, KNOM follows the money.

Some communities like St. Michael rely on crumbling
infrastructure to meet their daily sanitation needs. Others depend on
untrained water operators. Currently, the villages of Wales, Shishmaref,
Diomede, Stebbins and Teller are considered “unserviced”— meaning they lack access to residential water and
sewage.

In Wales, the fight for water and sewer spans generations. Frank Oxereok Jr. is Mayor of the relatively small coastal community. His father Frank Sr., who also served in local politics, instilled in Oxereok the importance of sacrifice from a young age.

“This is what my father and my brothers taught me—ever since I was younger—our elders used to say, you have to take care of your children and teach them. At the time we never thought about it but now, at this age, these things come back to me every time I think about community.”

Oxereok Jr. wants his grandkids to be able to turn on the faucet and
wash their hands before sitting down for dinner. He wants his children to pour themselves
a glass of water when they are thirsty. Although the community’s school and
clinic have running water, Oxereok Jr. says villagers
must rely on natural sources for residential needs.

“We use two different types of water. We use snow water for washing and we use water from the North and South creek for drinking.”

Over the years, the Mayor has learned to pick his battles. Right now, he is focused on rebuilding Wales’ 50-year-old washeteria, which is run by the city for community use and has two working showers for approximately 200 people.

Construction on a new facility
is slated to begin in July, but the road to cutting the ribbon has been a
winding one. Broken promises and poorly organized coalitions have hardened the
Mayor’s optimism. Following in
his father’s footsteps, Oxereok Jr. has come to realize a certain financial
reality:

“Yeah. I think after he left, I kind of stepped in[to] his shoes. And the main thing always comes down to—what I hear more than anything else—is cost. Money.”

Money talks. Off the road
system, where the cost of construction can balloon to Hindenburg size, money
does most of the walking too.

Understanding where and when to apply for grants can be the difference between a working septic system and an unserviced community. However, for local governments and tribal entities throughout Western Alaska, the source of funding for largescale water and sewer projects has long been a subject of confusion and controversy. Take Wales, where some residents wonder if federal grants are handed out alphabetically. As Oxereok’s uncle was fond of saying:

“Wales is always down in the barrel so to speak. Like my uncle used to say: ‘down at the bottom of the barrel.’”

The major sources of funding for sanitation in the Bering Strait region are split between federal and state agencies. At the federal level, the Indian Health Service (IHS), Environmental Protection Agency (EPA), and the U.S. Department of Agriculture (USDA) have individually appropriated congressional funds to be distributed to Western Alaska.

Those three agencies in turn work with state and local entities, namely the Alaska Native Tribal Health Consortium (ANTHC). There’s Village Safe Water, a subsidiary of the Alaska Department of Environmental Conservation; and the Capital Improvement Program (CIP), whose projects are selected by the governor.

Essentially, there is a pot of money for regional communities. Each year, communities in the Bering Strait region must navigate a labyrinth of bureaucratic tape in the hopes of ladling from that pot. Some communities get lost along the way.

Let’s start at the top. According to the Indian Health Care Improvement Act (IHCIA), the IHS is tasked with improving community health and providing access to sanitation facilities for Alaska’s native population. To this end, the IHS compiles an annual list of communities suffering from sanitation deficiencies: the Sanitation Deficiencies System Manual (or SDS for short).

“Each project that was in that system has a deficiency level. The purpose of collecting all of that information is to be able to, one, report to congress what the needs are.”

David Beveridge is the Director of Operations for ANTHC’s Department of Environmental Health and Engineering. He explains the difference between a “Level 1” project and a “Level 5.”

“Projects in Alaska range from a DL1, which might be just routine replacements, might be painting water tank or replacing a valve. A DL5 project means a house is without water or sewer. Those are the highest-level projects.”

According to the most recent SDS cycle, the villages of Wales, Stebbins, Teller, Shishmaref, and Diomede are all categorized as level 5 deficient by the IHS. The SDS manual’s priority system awards projects a total score out of 100.

“So when the funding is received by the Indian Health Service, they go down that list of priority projects and fund them in priority order.”

Other factors include a “Best Practice” score, adopted from the State of Alaska, which Beveridge says accounts for more than 15% of a project’s total score.

In theory, the communities that most need the funds are the first to get them, according to IHS materials. The SDS manual was devised to create a federal record of where those communities are. Nonetheless, Alaska Native villages have struggled in recent years to get projects funded despite clear risks to public health.

Megan Alvanna-Stimpfle is the
Self-Governance Liaison for the Norton Sound Health Corporation (NSHC). She noticed
a number of projects in the region weren’t receiving IHS funding:

“Essentially what [the IHS] did last year… they said ‘We’re only going to serve native homes. If there are other structures in a community that are not native homes, you, tribe, are going to have to find a match for those structures.’”

As stated in the IHCIA, the
responsibility of the Indian Health Service is to a community’s native
population. However, by requiring matching funds for structures such as
schools, teacher homes, tribal offices, and post offices, the IHS placed basic
sanitary needs for whole communities out of financial reach. As
Alvanna-Stimpfle explains, if a community can’t find the money…

In a congressional hearing this past December, Senator Lisa Murkowski articulated her displeasure with how the federal agency had changed its model.

“There have been interpretations more recently that are perhaps more stringent as to how those rules apply to non-Indian communities. Requiring IHS to then pay the “pro-ratic” contribution for whole project, which then make it absolutely impossible, infeasible, to move forward.”

For example, in 2018, Kotzebue was
forced to find tens of thousands of dollars in matching funds for a Level 5
sanitation project. They came up short and missed the entire funding cycle. The
washeteria project in Wales has struggled with ineligible costs as well.

Speaking to KNOM last fall, Senator Murkowski was blunter with her reaction to IHS’ policy on what constituted a “Native community.”

“Yeah, I think it just boggles the mind to think that this is what we’re dealing with… It is a challenge. This is yet one more challenge [and] we’ll get beyond this one too.”